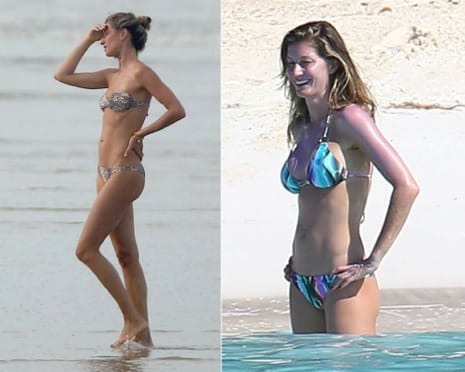 Gisele has yet to confirm that she went under the knife this past summer but it’s safe to say she is looking fuller and perkier! We love this mother of two’s subtle yet effective change. She is part of the growing trend of smaller breast implants that has swept across the United States. In the 80’s and 90’s bigger implants were all the rave (think Pamela Anderson in Baywatch) but it appears that women are wanting more natural looking breasts with more focus being placed on other areas of enhancement such as the buttocks and facial fillers. In a recent survey published by RealSelf, an online database where board-certified specialists answer questions posted by patients, asking surgeons about trends they saw in 2015 and what they expected to see in 2016- 40% of the surgeons said more of their patients had been choosing smaller implants compared with 2014. Women in their 30’s and 40’s (particularly moms) are the fastest growing group of patients seeking breast augmentation surgery. These women have lost breast volume resulting from pregnancy and desire to restore a natural, more youthful breast appearance. We are also seeing women increasingly getting breast lift surgery. The procedure reshapes breasts that are sagging but doesn’t increase their volume allowing for very natural results. #naturallookingbreasts #biggerisntalwaysbetter #mommymakeovers #moderateenhancement